Vitaly Stockman was the second speaker in this year’s Waffle Wednesday and he talked about his own startup journey. With his speech he wants to motivate others to follow their own dreams and visions, and to create their own startup company.

Vitaly is a technology enthusiast and an entrepreneur who has experience from over 15 years of international selling and software sales. Vitaly is originally from Riga and his family has a Russian background. He has lived in the US and graduated from a Finnish university.

Vitaly created his own startup called DeskMe as soon as he graduated from school with a master’s degree in 2017. The company itself made a profit already during the same year. DeskMe is a technology company with the goal of changing office behaviors. With the DeskMe software people can reserve office tables and meeting rooms easily and flexibly. DeskMe collaborates with Wonderland among other companies! 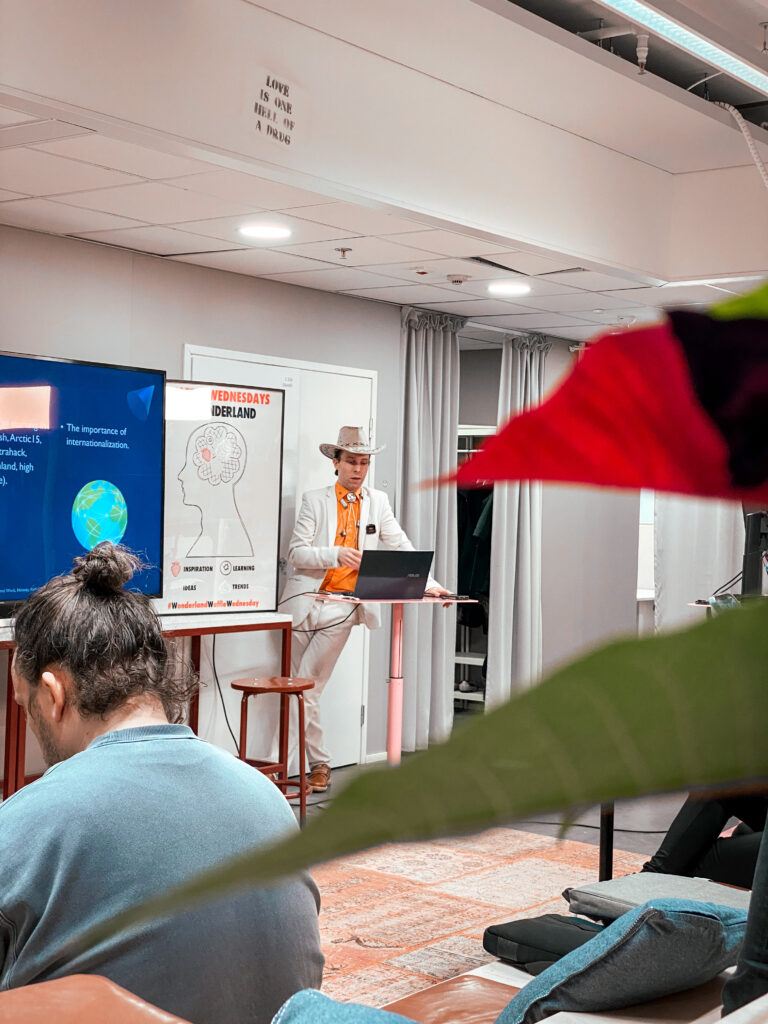 A startup is a company that can increase its operation profits quickly. This is why investors are interested in investing into these kind of companies, since they can make their investments back fast.

The startup journey & why it is not easy to start

The beginning stage of the startup is not easy but it’s possible. The first problem to solve are resources. How will you finance your company’s activities so that you will have enough of an income to take care of your family, take care of the bills and loans? The first and most common option is to have an external investor and the second option is to invest into your company by yourself. Vitaly himself decided to do the second option and worked full-time at a financial software company called DataPartner at the same time as he created DeskMe. The days he spent working full time but nights and weekends he spent with his startup. It is possible to create a startup while working full time, but it is very hard. It takes a lot of work and effort to do so if you want to proceed and get results. DeskMe is still at the beginning of its journey: right now, it is making sure that the customer understands how to use it.

In the beginning of the journey

When Vitaly started, he realized that everything is related to the customer.

Startup entrepreneurs have ideas, and their mission is to solve their own and others’ problems with their product. Before starting a company, the resources need to be counted carefully. Also, the company needs to figure out the number of potential customers. After doing that, the next step is to ask customers for their opinion, because that is valuable information for the business. By asking for opinions, the company collects information about what the customers actually need and want from the new startup company. The reasons behind the action are:

Why is it important to sell the product before creating it?

While buying product from you, the investors are not curious about the product itself, but the person who is presenting it. So, instead of buying the product they will buy you and they will pay attention to your characteristics as a seller.  And even though you could be a great seller by yourself, shared co-founding is still recommended. If the product has more than one founder the responsibility is shared between them and problem solving is 50% more effective.

To be a good startup entrepreneur, the thing that matters is the experience from startups, and not the age of the entrepreneur. Because of this, it is good to have a mentor, even though you would be excellent at your work or have many workers under you.

DeskMe is collaborating with Peter Vesterbacka from Rovio and Angry Birds but also with Kustaa Valtonen. They have been a part of the DeskMe project straight from the beginning. Vesterbacka and Valtonen are mentors, co-founders and funders of DeskMe and with their help, DeskMe avoided many catastrophes.

When the DeskMe project started, Valtonen and Vesterbacka were working for the competitor. Despite being competitors first, they formed a friendship and then moved to the stage of becoming mentors.

In the beginning of the journey, you might want to search for a partnership that is profitable for everyone. In case of DeskMe, Crazy Town has been a customer and companion for them, and starting from the beginning it was a great help since it is the biggest coworking chain in Finland. As affiliates, it is good to have companies that have patience and understanding for a new company. Especially the companies that are easy to approach are a good start for the startups and better places to start compared to the big companies who have big expectations. Crazy town was an excellent customer, because they use meeting rooms a lot and they have many customers who were interested in DeskMe’s services.

Through this DeskMe got a lot of new customers.

This means searching for new opportunities and exposing yourself to them. Events similar with Slush are meant to help people network with each other. In case of Vitaly, he met a CEO from Tokyo in Slush’s afterparty. In Finland we have a lot of events that are similar with Slush that gather a lot of participants outside Finland so attending these kinds of events is an amazing opportunity to find funders and other supporters.

A culture with high trust

Finland is not called a trustworthy country without reason, and as an example a lost wallet will find its way back to its owner. Because of the trustworthiness of Finland, we can have events like Slush and it’s possible to create this without a lot of paperwork.

By this paperwork we mean that if something happens, we have a literal agreement. The places outside Finland require a written agreement, but in Finland just one phone call is enough, and because of Finland’s reputation, we can assume that the agreement is binding. But Finland has its own dark side too: Finland is a small country. For starting a startup, the opportunities are great, but for growing them, the recourses are not good.

Funding is a thing that first comes to mind when people think of startups. Funding is needed, but it is not the first thing to do. If you take the funding too early, presenting your own idea could be hard, because the funders have their own opinion as well.

If the entrepreneur will budget an exact amount of funds for a year, there is a possibility that the fund is not going to last. You should keep an eye on the money so that you know if you will need more funders and more money as well. The company funding has two possible outcomes: it can be successful or it can fail. In a European mindset it is better to start by bootstrapping until the final funding plan is created.

To conclude, in the Finnish business culture, Finns usually don’t want to stand out from the crowd and this is coming straight from the Finnish culture. Sometimes it is important to expose yourself out of the norm to be the good partner for cooperating with different people. This is a little hard for Finns.

The live video from the Vitaly’s speech is available here.

Are you interested to be the speaker of Waffle Wednesday?