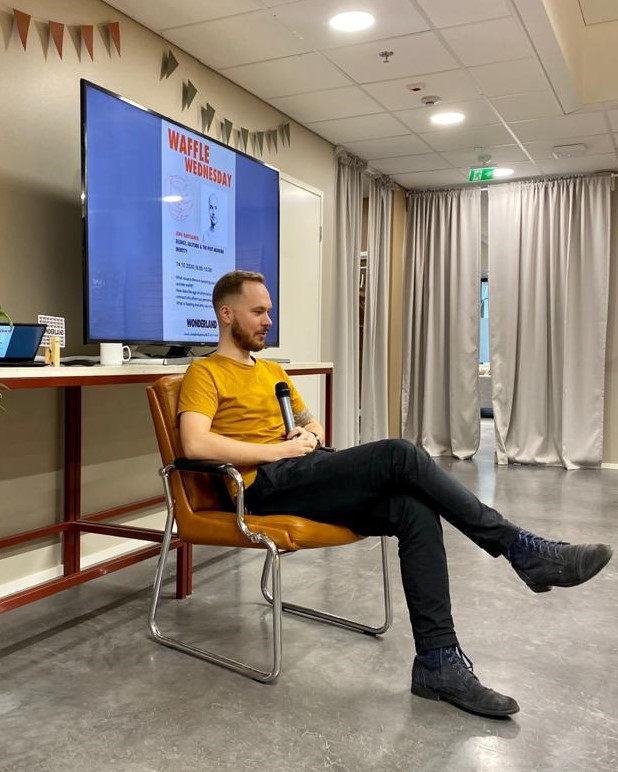 Juho Rautiainen came to tell us on Waffle Wednesday 14.10.2020 about silence, solitude and post-modern identity.

Juho Rautiainen is the co-owner of Float Helsinki, which has two locations in Kallio and Punavuori. The idea of floating is that the water is the same temperature as the human body. Then a person can close off the world around him in his mind and focus on relaxation. Rautiainen has studied theoretical physiology, social psychology and economics.

Rautiainen’s journey started in a museum where there was an exhibition of different religions and rituals. There have been rituals of going to a cave in many religions. The purpose of it has been to go to a silent place. Rautiainen wanted to know for himself what silence can teach him. The first thing Rautiainen did was go to a private island surrounded by the sea and without any amenities. Rautiainen thought it was an interesting and challenging experience in many ways. However, time was mainly spent getting food, carrying water, collecting firewood and doing other daily tasks.

What happens when you float?

The whole world around you disappears, the sounds inside your head begin to evaporate and are replaced by complete solitude in the universe. It may seem awful and scary at first but over time the fear gives way and it really starts to feel pretty comfortable. It is possible to experience ego death during floating and this is what happened to Rautiainen. The person himself looks at his own identity from outside the body and doesn’t know his own self, his existence or who he is. In Eastern countries, there is a perception that within a man dwells a core that is the absolute you. In Western countries, there is a mindset that people are rather the result of how people mirror themselves. The idea is that when a child is born, they are unable to experience themself or know who they are. As a child grows up, they begin to embrace other people by observing behaviors and begins to mirror themselves around them, creating their own set of values.

Something has happened to people’s social existence over the last couple of hundred years and the internet in particular has made a lot of changes. Today, a person has many different contacts or groups to deal with. In the past it was different, for example, back in the days a farmer knew people only from his own village. He could have his own family and he went to church with the villagers as well as hunting. Today, however, people have many circles in which they know different people but these groups of people are no longer in contact with each other. A person himself may now have several groups on Whatsapp with whom he is dealing with, for example through work, hobbies or leisure activities. In a way today, a person’s identity is built through several different groups of people.

Are you interested in hosting our next Waffle Wednesday hybrid event? Please contact us by email hello@wonderlandwork.fi